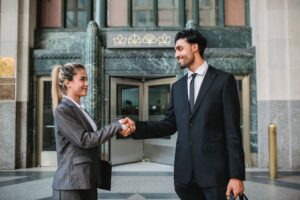 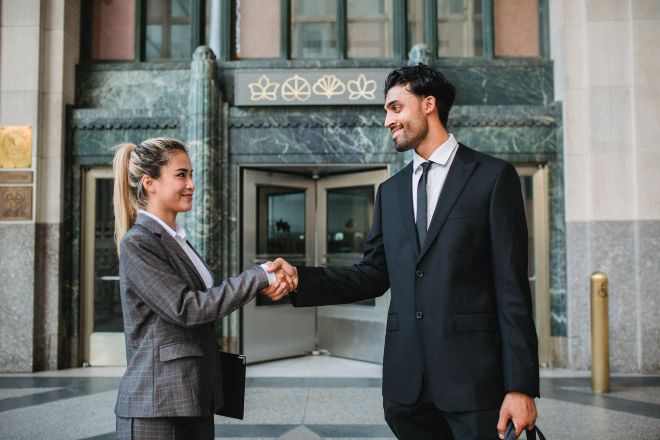 Figuring out what type of woman is an alpha male attracted to can be quite confusing, especially if you haven't experienced being with one.

So if you're wondering how alpha males in a relationship are, then worry no more. Outwit Trade and Morning Laziness are just some sites that have featured me as a dating and life coach.

What Type of Woman is an Alpha Male Attracted To?

What do alpha males want in women? An alpha male seeks out strong and independent women but is not overpowering. Alpha males have high standards regarding their careers, lifestyle, or relationships, so it's not surprising that they want a woman who's on the same level as them. Women who are confident and know what they want in life but at the same time allow the male to lead in the relationship appeal to these types of men.

1. She is highly feminine.

An alpha male is drawn to women who have a nurturing, warm, and gentle nature. And since they are the embodiment of the word masculine, they are attracted to women who are more feminine in nature, both in their physical and emotional stature. Science has proven that opposites attract. It also applies not just to magnets but to relationships as well. The opposing nature of masculine and feminine energy gives the relationship balance and strong chemistry.

2. A woman with the ability to possess altruistic activities.

Another desirable characteristic that interests an alpha male is when a woman's devoted to supporting a good cause that mirrors her principles and beliefs. Whether being involved in projects to transform a community or volunteering for a humanitarian mission, a woman whose selflessness and kindness go beyond her is one attribute that attracts alpha males.

3. A woman with patience and perseverance to handle downturns.

via: Pexels / Cup of Couple

A strong woman is not born. She is made. One is through the ability to hurdle through life's obstacles and adversities, whether in her career or her personal life. Her capability to face challenges and come out of them successfully captivates an alpha male as he can also relate to the experience.

4. She takes good care of herself.

Another item to add to what attracts alpha males is when a woman knows how to take care of herself. While physical appearance does contribute to an attractive woman, having a healthy lifestyle, whether physically, mentally, or emotionally, is something men tend to like, as these aspects of a woman's life impact her general appearance.

Alpha males seek unique women who are not afraid to go against the flow or what society dictates. She knows what she wants and does not give a hoot at what other people say, even when others have a different opinion about it.

6. She is a confident woman.

When it comes to choosing a potential partner, insecure women are a big no-no to alpha males. An alpha male is a confident man, and when it comes to his choice of women, he likes one that complements his strong sense of self-worth. A confident woman, not just someone who's sure of her appearance but is also certain of her decisions and ambitions in life, is happy with herself and is not easily threatened by other women in a man's life.

7. A woman who allows him to lead.

Alpha males tend to take on a leadership role, not just in the workplace but when they are in a romantic relationship as well. It does not mean that he seeks someone submissive and a pushover. An alpha male likes a woman who trusts his lead in a relationship and is comfortable following it, as opposed to a woman who wants to be the decision-maker.

While they are deemed dominant creatures, alpha males also get their confidence from the support of people around them. They appreciate encouragement and support from women when it comes to their decisions and endeavors. 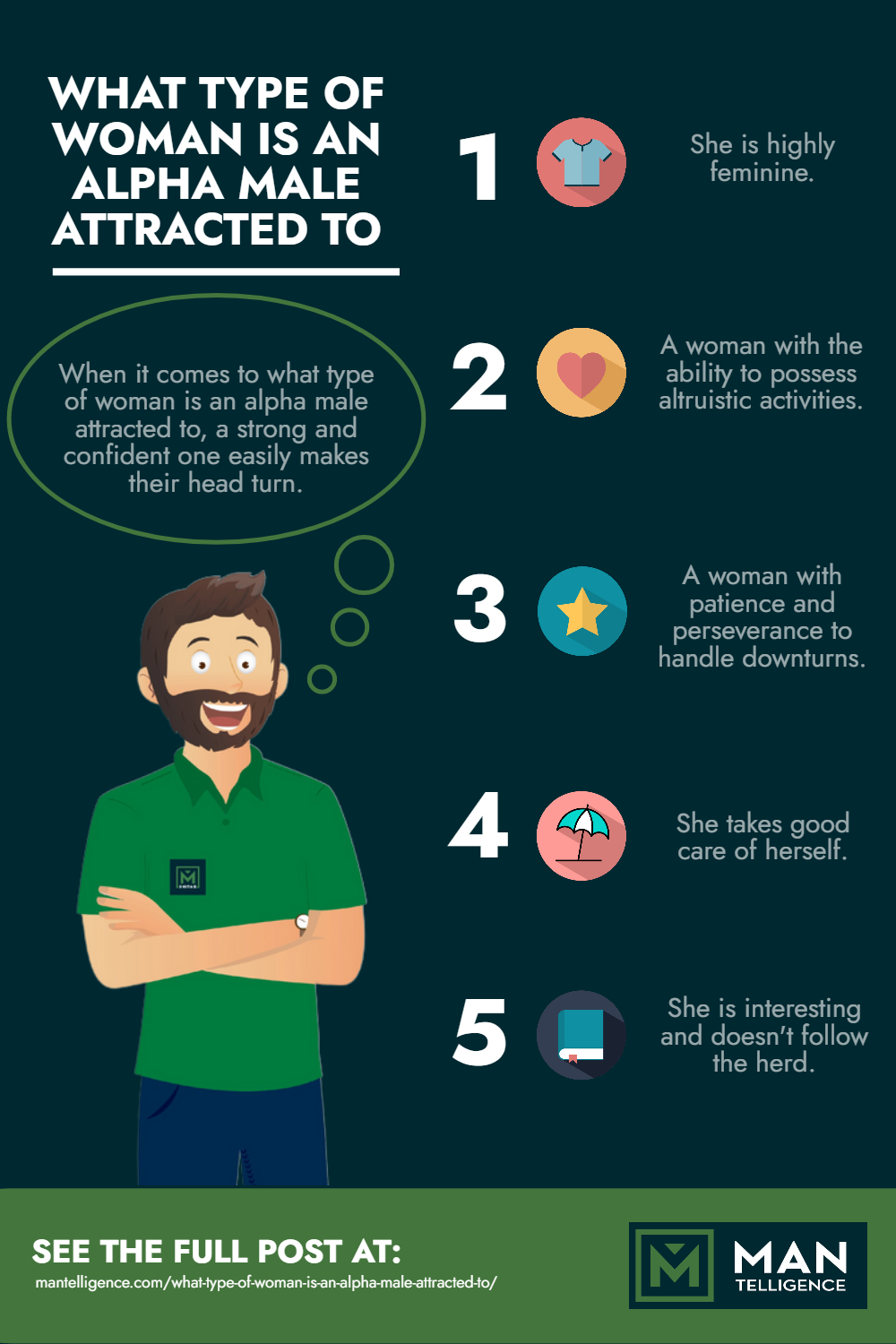 Alpha Male vs. Alpha Woman - Can They Be Together?

The main difference between an alpha male and an alpha female is their gender. When it comes to traits, both alphas are the same. And while alpha males and alpha females share common values, making them seem like the perfect pair, the alpha mentality makes it hard for them to end up together, especially if they are both aggressive.

An alpha male is attracted to a more feminine woman, while an alpha woman is to a more masculine man. But their similarities often make it hard for them to end up together.

When decision-making gets tough, an alpha partner calling on the shots can make things much easier. But what if both persons in the relationship are alphas? Who will be the one to call the shots? Who will lead, and who will follow? Neither one will follow the other. This is one problem that arises when two alphas get into a romantic relationship. Because alphas like taking on the role of the leader, no one will back down.

Alphas also tend to be dominant, and establishing dominance in a relationship can be exhausting in the long run. It will feel like a constant competition of wits which can eventually sniff the fire of romance. That is why an alpha woman is more drawn to a beta male, and an alpha man leans towards a beta female.

6 Things To Know Before Dating an Alpha Male

Alpha males can seem like the type of person to date when looking for a potential partner who has his life altogether. There are some alpha male traits that women find appealing, while some find them too strong.

An alpha male is a natural leader, and this means even in their relationships. It doesn't necessarily mean that they don't listen to their partner all the time. It's just that there are things he needs to be in control over. This type of man may be seen as a dominant male, but they are not domineering.

A real man with alpha traits can be dreamy, especially since he knows his worth and is confident. Their confidence which is easily spotted through how they communicate or their body language mainly stems from the support he gets from their family, peers, and partner.

3. They have a high standard.

A true alpha male's standards apply not only to himself and his mate but also to friends, career, and lifestyle. This alpha male trait makes it difficult for them to easily mix with other people because they are careful when choosing who they mingle with. And because they set their bar pretty high, they are not easily impressed.

When it comes to their loved ones, alpha guys can be very protective. He likes checking on his partner to make sure she's okay. But this characteristic can also bring out an alpha guy's aggressive nature, especially when people he cares about are wrongly or poorly treated.

They are honest with people. But the thing is, they do not hold back when it comes to giving their opinion or comment, not even sugarcoating them. Their brutal honesty can often lead to other people's feelings getting hurt, although this is not an alpha male's intent.

Alpha males do love themselves. A real alpha knows how to care for his body, mind, and emotions. He likes engaging in activities to better himself. He has an active lifestyle which also tends to rub off their partner.

There's so much more to know about alpha males. But for now, let these answers be your guide.

Do alpha males get jealous?

Alpha males are aware of their self-worth, making them less likely to get jealous of someone. Although almost everyone tends to, alpha males don't get overly jealous.

Are alpha males loyal in relationships?

Alpha males in love tend to be loyal to their romantic partner and expect the same from her. Even if alpha males may seem like they can get any woman they like because they are charismatic, they can be loyal to a fault.

Is it easy to date an alpha male?

If you like someone with a take-charge attitude in a relationship, then dating an alpha male will be easy.

Do alpha males have empathy?

While they are strong and confident, true alpha males are big on empathy. They have a knack for understanding things and the people around them, making them good leaders.

Click on these good reads for more about the alpha male persona:

When it comes to what type of woman is an alpha male attracted to, these guys are specific. Alpha males may have it all and can easily get any woman they want. But at the end of the day, all they really want is just what everyone else seems to be dreaming of- someone to love and support them.