Graham is our resident survivalist, EDC master, and expert prepper. He believes that, as the head of his household, he has to be ready for any situation (from big to small). On the weekends, you’ll find him in th ...
Read Full Bio

An EDC knife is one of the most important tools a guy can own.

...And really, a well-made EDC knife is the kind of thing every guy should carry. It’s a great (and easy) way to be prepared for any task that comes up during the day.

But more than that... it's a statement:

Always having a knife on hand signals that you're a man whose rugged, capable... and that doesn't wait for other people to solve your problems for you.

But here's the thing:
There are literally thousands of EDC knives on the market (which obviously makes it hard to which are the top EDC knives and which one is the best for you).

...And that's why I decided to put together this guide. It breaks down the top 10 best EDC knives and has an in-depth buying guide to help you find the best EDC knife for you.

What are those?
Best EDC Knife
How to Choose?
Top 10
Comparison Table

What are EDC Knives?

EDC stands for "every day carry." So, when you get an EDC knife, you’re looking for a knife that is strong enough to use for almost everything… while still being highly portable.

See... a good EDC knife should be one that won't make your pockets bulky or unwieldy... but it should also be sharp, have a highly sturdy blade, and be incredibly durable.

An EDC knife is light enough that you can forget it's in your pocket but is still reliable enough to handle just about any job.

The best EDC knife is the Benchmade Mini Griptilian. It's incredibly light in your pocket... but still razor sharp and expertly constructed.

It doesn't have many frills... but with an EDC knife, it’s more important that it performs well every time... which is exactly what the Griptilian does.

To read more about this blade... click here to jump to our review of the Benchmade Mini Griptilian, or here to buy this edc knife.

How to Choose An EDC Knife

Choosing the best EDC knife for you is a lot easier than you might think... just follow these three steps:

1. Decide What Sort Of Tools You Need

Everyone has different tasks that come up during the day... and, of course, those require different tools.

If you don't usually need to cut rope you probably don't need a dedicated rope cutter on your knife.

So… start by thinking about what your daily needs are:

2. Decide How Much You Want To Spend

As guys, we love to splurge to buy the best tools.

...But just like buying anything, it’s essential to set yourself a realistic budget. Using this number, you can quickly rule out knives that are out of your price range… and focus on picking the best knife (that you can currently afford).

3. Don’t Let Yourself Fall Into This Trap

Don't let yourself get a lower quality knife because you like the way it looks.

You want your tools to look good (I can’t get enough of the Dewalt yellow). But you always want to make sure you're getting a tool that works... and works well.

…And think about it:

This is especially true with an EDC knife. A bad EDC knife is unusable (whereas something like a bad screwdriver is slightly irritating, but still usable).

A quick note: these are the 10 best EDC knives currently available… but it’s still important to choose the best EDC knife for you and what you want to use it for (click here to see our edc knife buying guide).

Here are the 10 Best Every Day Carry Knives: 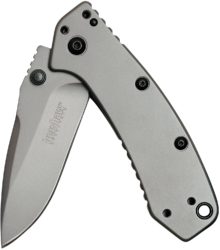 The Kershaw 1555TI Cryo is the one of the best EDC knives on the market for a few reasons:

In short: the Kershaw Cryo is an awesome value and an excellent EDC knife. 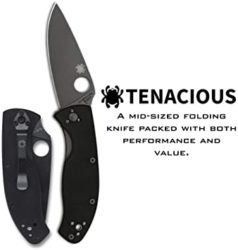 The Spyderco Tenacious is one of the best EDC knives available largely because of it's amazing durability.

It’s made with G10 scales (a special material that doesn’t collect dirt and is nearly impossible to chip), a skeletonized steel liner (tucked inside the handle), and i8Cr13MoV stainless steel (an affordable and high quality steel).

It even has Spyderco’s trademark, oversized Round Hole, which, coupled with the blade's shape, make opening the blade incredibly easy. If you want an easy to use blade, that will last for years, the Spyderco Tenacious is great choice.

The Outdoor Edge Razor Light has one of the coolest features I've seen in an EDC Knife:

The blades are designed so that you can swap them out every time they get dull. That means you always have a razor-sharp edge without having to sharpen them every time (which, especially if you’re new to sharpening, can be tough). Pretty cool, right?

It also features a Grivory (glass and nylon) handle with rubberized inserts for non-slip cutting. Did I mention that this blade is only $25?

At just 1.5 ounces, Gerber Paraframe is the lightest EDC knife on this list.

While a lot of smaller knives sacrifice strength for their reduced weight... the Paraframe's unique open-frame design and shape combine to make it incredibly strong.

It comes equipped with a tanto edge (a blade shape that is designed to pierce) and a full fine edge (designed to be easy to sharpen).

…And did I mention how affordable it is? At less than $10 you get the well-known Gerber brand, and the best pocket edc knife currently on the market.

Best Feature:
It has a reversible belt clip for ambidextrous use.

If you’re left handed (or like to be able to ambidextrously use your knife), the Ontario Rat II is your knife…

...and if you’re not, the Rat II might still be your knife as it combines a well-made blade and sturdy handle with some unique features:

So… not only do you get an extremely well made knife (for less than $30)... but you get a knife that is great for left-handed people.

So if you're left-handed, or just want a great knife... the Rat II is a great choice. 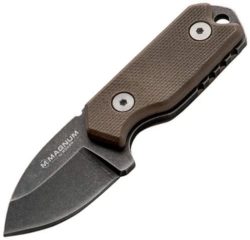 Best Feature:
It's designed to be worn around the neck.

The Boker Lil Friend is one of the coolest EDC knives because of its unusual design:

The Lil Friend is a neck knife (which means it’s designed to be worn around your neck). This comes with a few big advantages:

The knife is made of high-tension steel and a nylon handle (which makes it nearly indestructible). Combine that with its small size and fixed blade and you have an incredibly sturdy knife that you’ll always have with you.

In short: it's the best fixed blade edc knife on the market. 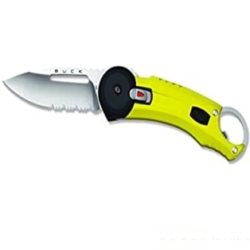 Not only do these combine to make the Redpoint great for EDC, but they also give it a versatility/functionality that most other EDC knives don’t have/can’t match.

Here’s the bottom line: The Buck Redpoint is highly versatile, from a well-known, reliable brand, and at $21, ridiculously affordable.

For guys who find that the smaller blades on many EDC knives just aren't big enough to get the job done… the Ganzo G7531 Folding Bowie is for you:

Its blade is huge (89 mm) in comparison to a lot of other EDC knives.

The G7531 has a bowie blade design (which means that the blade has a double edge at the point (but that still fits inside the handle and in your pocket)). This design is incredibly helpful in both hunting and survival situations.

Together, these makes the G7533 the best edc knife under $50... and if you’re looking for a hefty blade, without sacrificing portability, the Ganzo G7533 is a great choice.

The Triage was designed to be the ultimate emergency EDC knife.

…And it backs this claim up with a few impressive, life-saving features:

Emergencies aside, it’s still a great EDC knife. It has a durable 3.5 inch Benchmade blade, that features a sheep foot blade (which makes it much harder to accidentally cut yourself) and a rugged G10 handle.

Here’s the bottom line: at $150, it’s the most expensive EDC knife on our list… but its impressive safety features, and the high-quality that comes from Benchmade, combine to make it the best high-end EDC knife.

Benchmade has a reputation for making some of the highest quality knives on the market.

…And is one of their most popular EDC knives on the market. Now:

The Mini Griptilian doesn’t have a ton of frills… but it does the essentials better than any other EDC knife out there:

It’s not flashy… it’s designed to do its job (your everyday knife needs), and to do it better than any other EDC knife on the market. That, combined with the Benchmade name and reputation, make it the best EDC knife currently on the market.

via: Unsplash / Will Porada

An EDC knife is something you’ll carry with you each and every day.

So… read through this guide thoroughly to pick not just the best EDC knife, but the right EDC knife for you. This way, you’ll have something that you love and that you can pass down to your kids (along with the valuable, subtle lesson that a man should always be ready to solve his own problems.) Graham is our resident survivalist, EDC master, and expert prepper. He believes that, as the head of his household, he has to be ready for any situation (from big to small). On the weekends, you’ll find him in the great outdoors. He loves camping, offroading, fishing, and hiking with his two boys.