New? Start here. | This post contains affiliate links. That means that we receive a commission for purchases made on them (more info).
9 Shares
Share8
Pin1
More
Tweet

The reason why you should buy someone beer gifts is simple:

If you are struggling to find that very unique gift for someone, there's an almost universal and easy answer: buy them beer. Or buy them something related to beer.

There are plenty of great beer gifts out there this holiday season.

Whether you're looking at some beer gift baskets or a beer of the month club, there are tons of great, creative beer gifts that really make the holiday merry and bright.

So, stop stressing about the holiday shopping and use the lists below to find the perfect beer-related gift for anyone and everyone in your life.

Not all gifts for beer lovers are created equal. There are a select few that are so good that just about any beer lover will love them.

Here are the top 23 beer gifts:

Nothing says let's chill better than a set of cool, cooled beer coasters.

Forget about lugging the cooler around when your gift-receiver has this ice pack around.

Have a friend who's been looking for a way to carry a six-pack to the next tailgate? Not anymore.

This season, give a great poster that informs your novice drinkers all about the world of beer.

A fun way to combine travel with great brew.

Lots of beer related items to get someone in the mood for a brew.

The newest, classiest way to store your six-pack.

via: Amazon / A Gift Personalized

Make the next pint special by sharing it in some personalized glasses.

Be the hero who saves someone from ever drinking warm beer again.

Tired of local options? Give someone the chance to brew their own beer.

Know someone running out of space for beer in the fridge? Change their lives forever.

Let someone pour the next pint in real style.

Offer someone a little literature under their glass.

A beer that always tastes fresh as a new pour is truly the gift that keeps on giving.

Now beer can be on your toast as well!

17. The Search for God and Guinness: A Biography of the Beer that Changed the World

A great gift for your intellectual beer drinking friends.

A growler that keeps beer fresh and suggests the adventure at the bottom of every glass.

For those who love to smell good and dream of beer among the shower suds.

Drink from a real ox horn the way the true ancient drinkers did.

Great for those who want to know more about beer, whether newbies or experts.

It's everything you'd need to open a pub in your own basement.

23. The Ultimate Gift for Men

12 beers and all the stuff you need to get outside and enjoy them (weather permitting).

The #1 Best Beer Gift: a Beer of the Month Club

All of the gifts on this list can be great for someone in your life who loves beer, but there really is just one that literally keeps giving the whole year round: a beer of the month club.

Going with the quality beer of the month club lets you give a gift that keeps those close to you happy and drinking quality beer from January all the way until next Christmas. Then buy it for them again.

Some people can be satisfied with a six-pack of one of the main beer brands out there. Just walk into any store and grab something with a familiar name off the shelf.

For those with more discerning tastes, you need craft beer gifts that include a little more surprise and artistry. Grab a few of these to make any beer fan happy, no matter how snobbish.

A craft beer club designed to give someone variety and new tastes every month.

Give a membership to the rare beer club to those who love the obscure as well as the delicious.

For those who can't get enough India Pale Ale, there's nothing better than the IPA of the month club.

A great way to remember all the new beers someone tried this year.

99 bottles gives you a lot of beer-based inspiration for the year.

Make sure someone special is always drinking beer from the appropriate glass.

30. The United States Of Craft Beer: A Guide to the Best Craft Breweries Across America

Why not plan your next road trip with someone around the best breweries?

Keep someone's feet warm is these socks while also ensuring craft beer is available in every emergency.

via: Amazon / Craft A Brew

Stop looking for new IPA beers and craft your own.

Nothing says "I love you, and you love beer" like this personalized flight sampler.

Beer, snacks, and a game plan for a nice afternoon together trying new beer. Does it get any better?

Perhaps the most obvious gift to give a beer lover is just that: beer. Getting a great basket of beer for someone gives them the gift they prove they want all year long.

Pick one (or more) baskets from those below to ensure whoever receives it has a truly happy holiday.

A basket for those who love a good IPA and a good snack, so everyone.

Beer and football: now why didn't anyone thing to combine those two before?

The more beer, the more snacks, the happier the gift receiver.

Everything you need to start a BBQ right away...like, right after you give the gift.

A perfect snack/drink combination for the carnivore in your life.

A little international flavor for those wishing they weren't at home right now.

The best sampler of all the great things Ireland has given the world.

Simple and straightforward for the person in your life who likes their beer that way.

A way to make that Guinness gift to a Guinness lover a little more special.

A taste of California's best, with a few treats on the side.

Let's be honest, beer, while delicious, can also be hilarious, and can lead to some hilarious situations.

Remind someone you love not just of how great beer is to drink but how fun it is to drink with a few of these funny beer gifts. 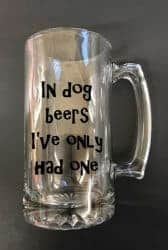 Give someone the excuse right on the mug to try one more.

For the competitive beer ponger in your life who needs to try while they travel.

Encourage travel and seeking out great beer all in one gift.

via: Amazon / Late for the Sky

48. Brew-Opoly Monopoly Game by Late For The Sky

No one is ever going to call the beer version of Monopoly boring.

A laugh under every beer to add to the ones already in the bottle.

50. Beer Is Made From Hops Hops Are Plants Beer Is A Type Of Salad Green Print Fun Drinking Humor Bar Wall Decoration Sign

The logic checks out: beer is a salad.

Chuckle at the quotes, keep the beer cold, and make sure it doesn't slip out of your hand while you're laughing.

Get someone to wear the truth every time you meet: you're Beer Friends Forever.

A goodnight story to read when to someone when the room gets a little spinny.

Give this to your favorite klutz to remind them how "hoppy" you are to know them.

With politics fatigue, just about everyone can sympathize with this embroidery.

Encapsulates the sentiments of the season: I'll have another one.

Beer can be relaxing, it can be fun, and it can be delicious, but for some people, it's also a creative enterprise.

For those you know who don't just buy their beer, they make it, pick out some of these gifts for beer brewers and enjoy the fruits of their labors.

A new and better way for someone to put a label on their beer.

Once they have a sign, they can officially call the basement a pub.

A great way to get someone to stop talking about beer and start brewing it.

The most accurate clock for a brewer.

Don't let someone you care about forget their best recipes.

Now, you can carry your personally crafted beer on tap everywhere.

Take brewing in a new direction with a mead making kit. 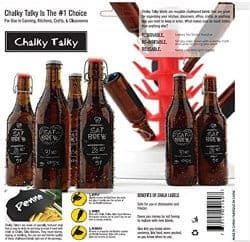 Give the gift that keeps someone's home brew fresh and well-labeled, maybe they'll thank you with a bottle.

65. Radical Brewing: Recipes, Tales and World-Altering Meditations in a Glass

Stories and recipes for those who are a little out there with their beer.

Give a sour beer lover a few new ideas for their next batch.

What will give someone more joy than making their first mini-keg?

A fancy and effective growler someone will be proud to pour their own beer from.

69. Brew Like a Monk: Trappist, Abbey, and Strong Belgian Ales and How to Brew Them

All the background info on how humanity achieved to the greatest drink ever invented.

An effective and cheap way to help someone keep their bottles fresh and well capped.

If the person you're shopping for isn't the biggest beer fan, we still have plenty of great gift ideas for you to choose from. Take a look at some of these:

No matter what beer gifts you're looking for—from beer gift baskets to beer of the month club members to home brewer kits—giving a gift someone can drink (or use to drink) is sure to make someone's day.

When no other gift seems like it could work, go with what someone really loves. Beer can make for a funny or very genuine gift. It's very flexible that way.

Just choose the right item above, and enjoy the happy look when they open it.