How Do You Talk To A Girl If You're Shy - 4 easy steps to follow. 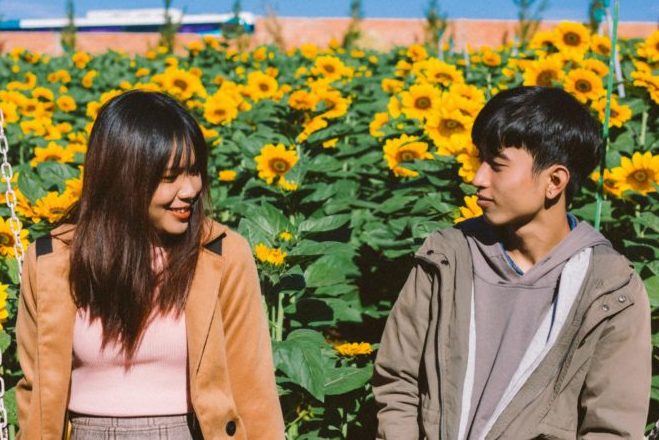 How do you talk to a girl if you're shy? This question has probably kept shy guys awake at night. Why aren't we surprised?

For sure, when you're shy, you wouldn't know how to talk to girls and this exponentially decreases your chances of learning how to get a girlfriend. And, this is why you should start knowing how to stop being shy around a girl. Thankfully, this guide will help you to do just that.

Why Important?
How to Talk?
How to Text?

Why Is Knowing How to Talk to Girls if You're Shy So Important?

So, you may be thinking that just because you're shy, you wouldn't get a girlfriend forever, right? Well, this is entirely false because we know for a fact that being shy hasn't stopped a lot of guys from getting girlfriends. See, being shy doesn't mean you're going to be forever alone and single.

The key here is to learn how to talk to a girl you like, even when you're shy. Because, yes, it's possible and it might even be easier than you think. Man, when you get the hang of it, you can even become the life of every party because you know how to talk to girls at parties.

If you still aren't seeing why knowing how to talk to a girl if you're shy is important, then you're really missing the point here.

How Do You Talk to A Girl If You're Shy

Talking is a very essential part of building a connection with someone. So, while it is true that actions speak louder than words, you still cannot discount the fact that words can definitely help you out when it comes to when making a girl want you, and ultimately getting a girlfriend.

You see, when trying to get the girl, you've got to do some talking too. But, how do you talk to a girl if you're shy? Well, don't worry because we're going to break it down to you step-by-step. Learning how to talk to a girl even when you're shy has never been this easy.

Alright, just like almost anything in this world, the first step is usually the most difficult, but this is undoubtedly the most important as well. You should know what to say to a girl.

Why? Because this is the whole point of all of this. If you've got nothing to say, then we shouldn't be talking about it anymore. So, ask yourself, what do you want to say to her? Think about it hard because what you're going to say counts, obviously.

Pro tip 1. Prepare the things to say to a girl you like

Being prepared is always a good thing, but it is especially true when you want to learn how to talk to a girl. See, no matter how shy you are, if you're prepared, you can do this with ease. Be prepared by thinking of great things to say to a girl you like ahead of time. Plan things to say to your crush so you'll not freeze and hesitate when you finally get in front of her.

When planning what you're going to say, compliments are absolutely handy. This is because compliments are really sweet things to say to a girl which will almost always result in positive interaction between you and your crush, which is the best and safest way to go.

2. Start a conversation with a girl

When you have already planned and decided what you're going to say to a girl, the next step is to gather all your strength and finally come up to her. Of course, this gets easier when you feel confident about yourself.

So, before approaching her, make sure that you are at your very best and you know how to start a conversation with a girl. You can even practice saying the things you've planned to say in front of a mirror. While you're there, fix your hair, your shirt, and of course, check your breath. When you think you're all set, go and approach her. Remember to stick to the plan and you'll be good.

After successfully starting a conversation, you have got to know how to keep the conversation going with a girl. Do this by asking open-ended questions that are broad enough to encourage a bit more of an exchange between you two. Also, keep the conversation light by asking about her or about the place where you're in. In other words, don't touch topics such as politics and religion. It's pretty early to get to that during this stage.

Now, no matter how much you enjoyed the experience, you'll eventually have to end it. Remember, it is better if you're the one who's going to end the conversation rather than to wait for her to get bored and be the one to ultimately end it.

When you think the conversation is about to become boring real soon, you should end it gracefully. Do this by telling her how you loved talking to her and how you want to talk to her again.

Depending on how you felt your conversation went, try to ask for her number or her social media handles and tell her you'd love to talk to her there too. Of course, only do this when you feel that she also likes talking to you. That way, you'll know that you have a greater chance of talking to her virtually too.

How Do You Text a Girl If You're Shy

Despite the steps we've provided above, not everyone is going comfortable starting a conversation with a girl in person. Some, if not most, would like to build up their courage by texting a girl first. However, knowing how to text a girl you like isn't easy, especially when you're shy. So, how do you text a girl if you're shy?

Well, you can basically follow some of the steps above too because they can also be used in learning how to start a text conversation with a girl. Planning and preparing what you're going to say still applies. But, now that you're texting, appearances don't matter anymore. What matters now is your texting etiquette and the topics you're going to text about.

The good thing about texting, though, is that you have time to think about what you're going to say next, and you can proofread your messages before sending them. Make sure to maximize these advantages and you're off to a good start.

More awesome Tips To Get The Girl

Getting her to talk to you is the first step in getting the girl. Next, you've got to get her to like you. Check out these amazing resources we have to help you get the girl:

So how do you talk to a girl if you're shy? Hopefully, this question won't keep you awake at night anymore. See, knowing how to talk to girls starts with figuring out how to stop being shy around a girl. Once you get past the talking dilemma, learning how to get a girlfriend will not be as hard as you think it is anymore.